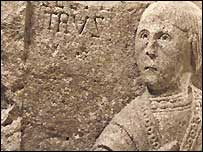 A stone carving that was used as a cat’s headstone has sold for £200,000 at auction – five times its estimate.
The medieval limestone relief of St Peter was discovered at a quarry by a stonemason Johnny Beeston, from Dowlish Wake, Somerset.

He took it home and used it as a grave marker when stray tabby cat Winkle died. But when he himself passed away the stone was examined by a historian.

The carving was sold at Sothebys in London on Friday.

The importance of the piece was only realised when potter and amateur historian Chris Brewchorne spotted it lying in the couple’s garden.

Alexander Cader, of Sotheby’s, said: “The relief is made from Oolithic limestone and is incredibly rare, as few reliefs of this period have survived, time normally having worn the surface detail away.